The City That Refuses to Go Under 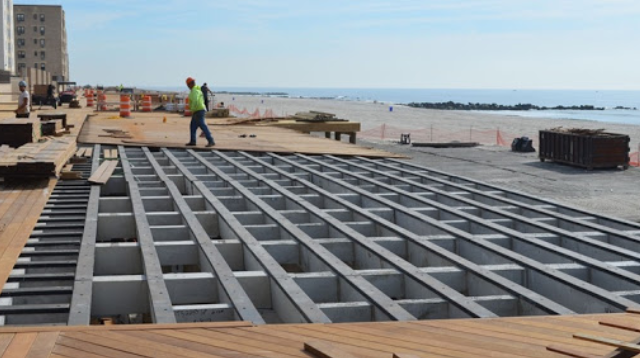 When I was growing up in Rockville Centre, my family would drive to Long Beach in the summers. Back then it appeared so innocent, so clean, so simple.

My dad would toss us into waves, our limbs flailing as we giggled at the sudden flight, landing in water that was both cold and soft. He made up names for the waves and told us stories about them.

We learned the fun of body surfing, along with the pain of crashing into the hard sand. After cries of ouch, Dad’s quick rub on the butt would send us running back into the very ocean that tossed us.

These experiences drew me to live on Long Beach as an adult. In my first apartment, my bedroom provided a view of the Atlantic Ocean. I could hear, see, and smell the ocean all the time. Conversations on the boardwalk floated in through my window.

After six years, I moved back to Rockville Centre, but five years later, like the turtle finding the sea, I was called back to Long Beach.

I was living there when superstorm Sandy hit in October of 2012. The bottom half of the house I was renting was flooded with more than three feet of water.

Amid the devastation – the pieces of the boardwalk strewn by the bay and all over town, the flood that consumed our homes and flooded our backyard playgrounds, the sand drifts that trapped cars and blocked traffic – was a community that refused to go under.

Although sad stories littered our City by the Sea, they bound us together like war buddies. The superstorm turned strangers into friends. Owners of local businesses came into focus as people with children and mortgages. Big-box stores showed a heart with significant discounts to help us rebuild.

Red Cross trucks, the National Guard, and people in FEMA jackets populated the area amid the debris and rubbish that lined our streets.

A lot of us left. We had to. Our homes were not livable. We moved in with family and friends. We learned another lesson in grace, because we were given places to live and we were grateful. We shared frustrations and woes about insurance companies and federal aid and reconstruction.

And slowly, mercifully, the flood of angst receded like the tide – not forgotten – but replaced with resolve.

Nail salons and diners and supermarkets came back. Roads were cleared, homes were rebuilt, storm-damaged cars were replaced. I found a new home in March of 2013.

Then summer arrived. From the first weekend in June, I saw fathers playing with their children in the surf, walking toddlers carefully into the water. I watched older kids bodysurf and build sand castles. Now we’re watching our famous boardwalk return in pieces.