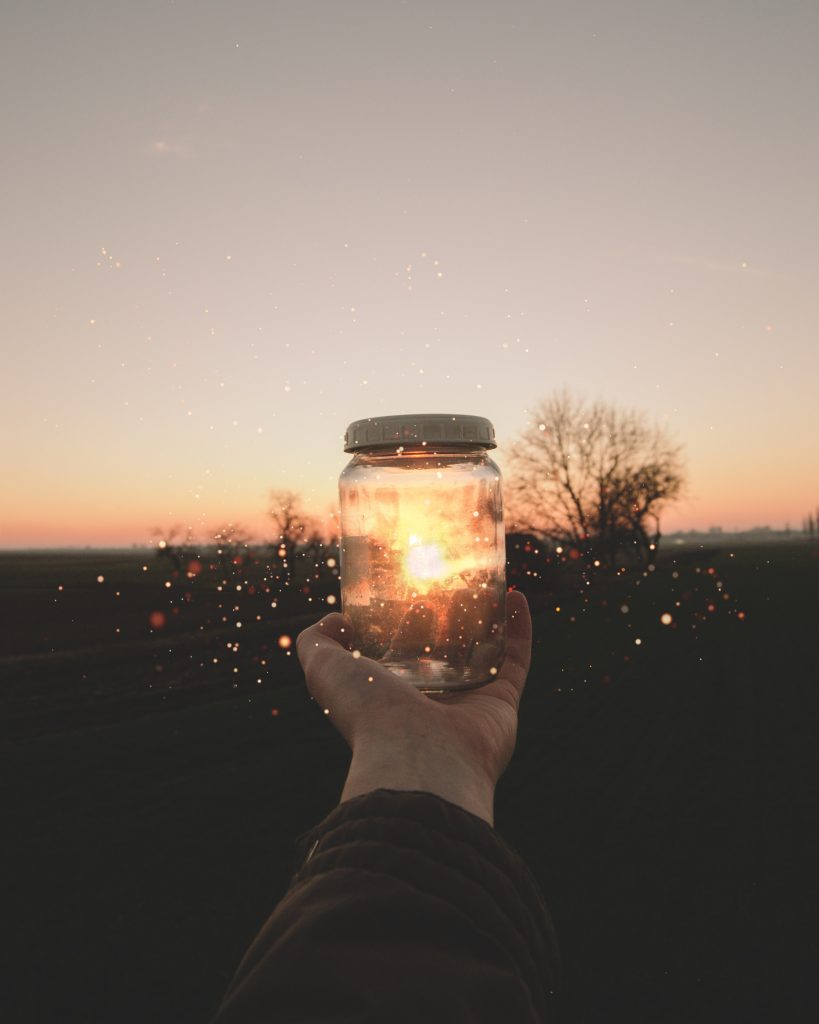 The brain is an amazing thing. Our brains are processing information constantly at warp speed.

I cite Masuro Emoto’s study of water in my book, Happy Brain, Happy Life. Emoto was a doctor of Alternative Medicine in Japan. He claimed that human consciousness has an effect on the molecular structure of water, and he believed that water could react to positive and negative thoughts and words.  He conducted a study with two test groups to prove this theory.

One group was told to speak lovingly to a jar of water; the other group was told to harshly criticize the other jar. This tenet was based on the fact that human beings are 70% water; as fetuses we were 99% water. Therefore, we exist mostly as water.

If negativity can have any effect on water, what is it doing to us?

If we, as dominantly water, believe ourselves to be wrong somehow, or depressed, or negative, or worse, and we tell ourselves we are not lovable because we are too much or not enough, then that is the narrative the brain internalizes and reacts to. That becomes the energy with which we surround ourselves – and we become those thoughts.

That’s where your brain comes in. We can change the brain pattern by infusing it with positive messaging. This is as simple as congratulating yourself for remembering everything on your to do list. I changed my internal narrative by shutting out negative thoughts such as “Stupid, you forgot your keys again” to “You remembered your keys today, you are so smart.”

I then leveled up my messaging to help me feel confident in a new position in my company. As I conducted more research, I found study after undisputed study that specifically cited meditation and mindfulness as one of the key components to living a happier, more balanced life.

I discovered Sara Lazar, PhD and a neuroscientist at Harvard, who published the benefits of meditation and mindfulness in the Washington Post in May of 2015. She put forth scientific evidence that is unquestionable.

Let’s get some terminology down first: the hippocampus is the part of the brain that controls memory and learning. The amygdala (pronounced: eh-mig-dill-a) is a brain region associated with anxiety and stress. Both of these areas house gray matter. Lazar’s study discovered that people who meditated 30 minutes a day for eight weeks had increased gray matter in the hippocampus (memory and learning), and a reduction of gray matter in the amygdala (anxiety and stress). There were no changes in the brain matter of the control group that didn’t perform mindfulness meditation.

What does that tell us? That meditation is proven to improve memory and learning while reducing stress and anxiety.

There’s more though. If you’ve suffered a trauma, and you repress that trauma, your brain is holding that trauma in the stress and anxiety area. To put it in laymen’s terms, it’s akin to that area of the brain growing, leaving less room for new memory and new learning. That cycle affects your actions, decisions, and behaviors. If our actions, decisions, and behaviors are stemming from the anxiety and stress core of our brains, then we are motivated from that point. Therefore, if we are motivated from that point, we are making decisions rooted in fear, stress, and anxiety. That then creates a cycle of anxiety or worse in our lives.

Dr. Oz ran a show on this as well. He looked at the brain of a deceased monk who meditated daily for his entire life and compared it to the brain of someone the same age who did not meditate. The hippocampus (memory and learning) was noticeably larger in the monk’s brain. The amygdala (anxiety and stress) was noticeably smaller.

Women – as a general rule – have better connections to the amygdala – which is like an alarm in the body. It’s the part that makes us react quickly, or too quickly, or say things in anger. When we get upset and we are holding anger or stress, the amygdala starts firing. How many of us women have been accused of being too emotional – especially in conflict with a man? Blame the amygdala. If we can learn to calm ourselves down first by breathing deeply before we react, the amygdala calms down and the pre-frontal lobe lights up. The pre-frontal lobe is like our inner control panel. It monitors emotional expression, problem solving, memory, language, judgment, sexual behavior, and our ability to communicate effectively. You want to be coming from that pre frontal lobe area in an emotional conflict.

Neuroscientists have studied brain reactions to varying stimuli. Different mental activities actually change brainwave patterns. For example, a musician has areas of the brain that are thicker in relation to fine motor skills.

As your brain changes, you change. Caffeine stimulates; alcohol relaxes.

Consider these findings from a study by Dr. Rick Hanson:

Consider how joy reacts in the body. The positive benefits of happy, joyful experiences can literally reduce stress in our bodies by dampening the arousal of the sympathetic nervous system (“fight or flight”) and by activating the parasympathetic nervous system (relaxed and contented). Positive feelings reduce the impact of stress on our cardiovascular systems. They increase psychological resilience, lift moods, protect against depression, and promote optimism.

Over time, they help counteract the effects of trauma or other painful experiences. When you remember something painful from your past, your brain first reconstructs that memory – including its emotional associations – and reconstitutes it in storage with remnants of your state of mind at the time you recalled it. This means that if you were feeling sad or negative or angry in the time of the actual memory, then your recollection of it will be increasingly negative. Alternately, if you recall it repeatedly with a realistically upbeat state of being, then it will gradually come to mind more and more with a more neutral quality: you will not forget the facts of what happened, but their emotional impact will slowly fade – and that can be a great relief.

This results in highlighted key states of mind so you can find your way back to them in the future – and can more readily tap into peace, contentment, feeling strong, well-being, etc. It’s like getting a reward for doing something that’s noble but not always easy, thus supporting ongoing motivation. All these benefits work for children by the way.

Even minor or fleeting experiences leave traces in the brain. Consider your dream state. How often has someone you know well, had a different face in the dream, yet you know it’s them in the dream? The face could be someone you passed on the street, or saw in a restaurant – yesterday or five years ago. Our brains are in a constant state of stream of consciousness that leave marks on your brain. How this information is assimilated and manifested can depend on your state of mind.

Say we both dream about apples. If I used to pick apples with my very kind grandfather, apples have a positive connotation. But if I was pelted with apples in kindergarten by mean-spirited classmates, apples would symbolize negativity and betrayal in my brain and manifest as such.

Your experiences are important not just because of their brief effects on your subjective quality of life, but also because they produce enduring changes in the physical structures of your brain. And these affect your well-being, functioning, and sometimes your physical health for days and decades to come. This affects you and others because your reasoning is subjective to your brain training.

So what do we know now? We know that we are tied to our memories, and that memories associated with fear and anxiety take precedence in our brains. We act based on these tightly held beliefs and that can prevent us from fully enjoying our lives or experiencing true happiness.

Practicing brain balance is important. Making sure we increase our positive memory databank is even more important in order to give yourself a happy brain. And a happy brain is a happy life.

Instant Social Distancing - wherever you go!

Your personal space is more important than ever and social distancing is here to stay. Frankly, it’s a safer, healthier way to go through the day and socially appropriate too.

I love these blankets – especially since we are all craving outdoor time for the spring and summer! They’re cotton, great quality, and they measure 6 feet x 6 feet all around. You can take them to any outdoor setting, spread it down, sit right in the middle and you have your social distancing marker wherever you go. They’re also pretty cozy for some household snuggling! And I like the tabs on these so you can roll them up, tie them, and bring them anywhere.